Sorry it has taken a few days for me to get to this post. I was hoping to get it done last night but owning a business and working a 2nd job while having 4 kids home for the summer sucks up a lot of your time. By the time I have the time to sit down I end up passed out :)   It happens to the best of us.

A few days ago Tip Top Nails South Africa announced another contest that they were putting on.  CHERRY BLOSSOMS!!!! Since I had just won the Patchwork contest I could not enter but since I had never tried it before I just wanted to give it a shot.  I made a mess of a few samples on my nail wheel.. I have a hard time with knowing what I want to do and then "KNOWING"  what I want to do.  I knew I wanted to do Cherry Blossoms but had no clue what colors or how i wanted them to look since I had never done them.

I played with some colors and decided that I wanted Blue skies as a back ground.  Problem I ran into was I only have a few blues polishes and none were the color I wanted to use. When I finally got it narrowed down to 2. Orly SnowCone and Mabelline Color Show Denims. Snowcone was to light and Denims was to dark... So I mixed them together and got an amazing blue that had a little shimmer. Both polishes have good coverage so this is one coat. 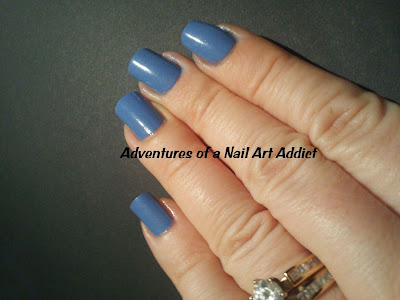 Then I used a NO NAME shimmery brown that came in a box of polishes my daughter got for Christmas.  The color is pretty and is almost more a purple then a brown.  I used a brush that I had cut down so that it was super thin.  I had gone through and looked at a some pictures of Cherry Blossom nail art just to get an idea of how I wanted to do mine.  The ones I liked the most were the ones where the tree when across the nails as a whole.  So if you look close you can see how each nail leads into the next one. 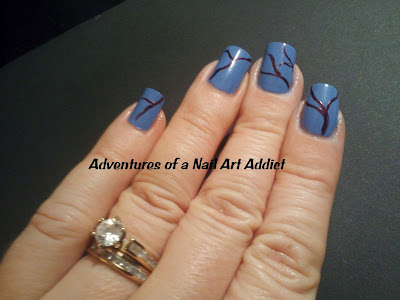 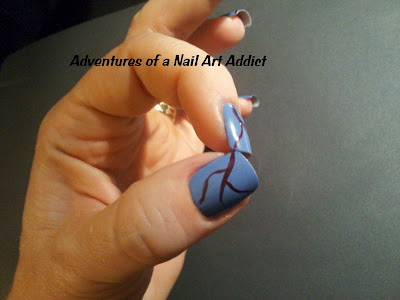 I tried a few ways to draw the blossoms but liked the ones done with the dotter tool best.  Now I don't really have a dotter tool.  I have a dry embossing tool that I used in my scrapbooking.  It came in an art kit that one of my daughters had gotten and really we had no idea what it was until I got into making cards.  The tool is supposed to be used with a stencil and a light box.  You put the paper over the stencil and the image is shown from the light underneath.  You can then use the ball on the tool to follow the stencil and it makes a raised image in the paper. After getting into nail art I figured I could use it for both :)

I used Essie Marshmallow for the flower and Sally Hansen Salon Made you Blush for a small flower center. 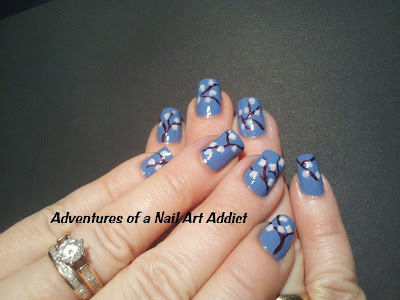 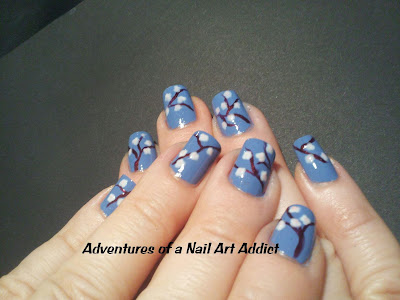 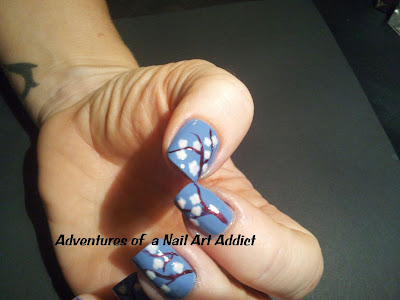 So there you have it... my version of Cherry Blossoms.  I would love to do these again with a background that looks more like a sunset.  I just think that would be pretty.  I need a little more practice on fading my colors together.

Here are the products I used. 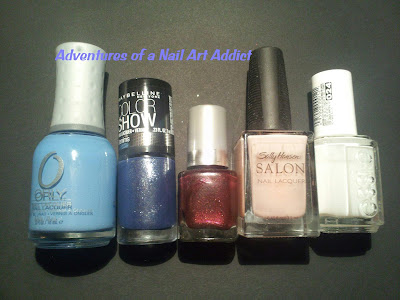 Well that is it... If you have a Cherry Blossom mani stop by Tip Top Nails South Africa an enter the contest. I look forward to the next one.

Also Neverland Nails is doing a summer fun challenge coming up on the 19th that I am looking forward to being a part of.  This is also something I have never done before and after reading her list I am excited to get started  :)

Well thanks for reading.. If you try these..show me a picture on MY FACEBOOK PAGE I would love for you to share your art.

Posted by Adventures of a Nail Art Addict at 8:27 PM

Adventures of a Nail Art Addict
HI! I'm Amy. I am a 30 something mother of 4 who has just re-found my obsession for nail art. I want to learn as much as I can and share as much as I learn. Thanks for reading. :) All views and opinions are my own. I am not paid to endorse any products and any endorsement is of my own opinion.