Hello and welcome back to my NAIL-VENTURE!!

Friday night I had the opportunity to do something so fun.  My daughter was invited along with 7 other little girls to a birthday party for her friend that was turning 13.  My thought ... How fun would it be to give each little girl a fun mani.  I had such a good time.  We got a late start because there is A LOT to do when your turning the big 1 - 3!!  So I didn't get started until after 9. 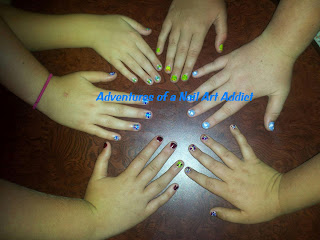 9 little girls, However 1 left early and I did not get a chance to get a picture of her mani before she had to leave, another little girl had a recital the next day and couldn't wear polish on her nails so we did her toes.  I did get a picture of those. My poor daughter.  It was almost 2:00 am when I finished with the last one so she got the promise to do hers at home.  So 8 little girl nails painted.  :)

First is the BIRTHDAY GIRL!!!
I thought how fun to do cupcakes and confetti on your birthday. 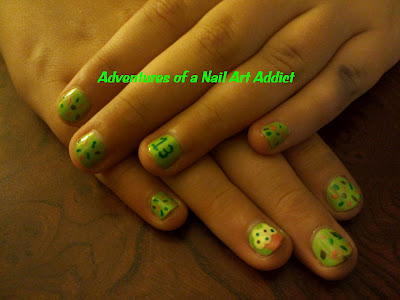 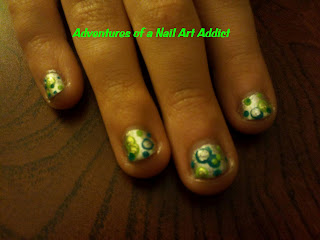 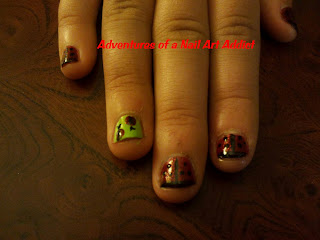 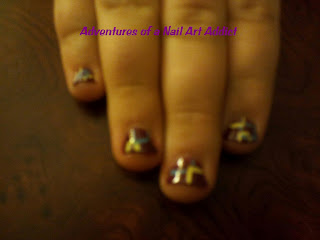 This picture did not turn out.  I am not sure why and when I took it, it didn't look blurry but now not really anything I can do about it. 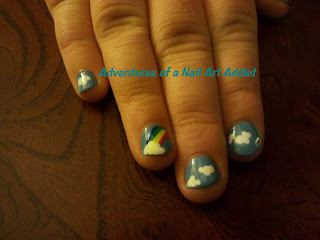 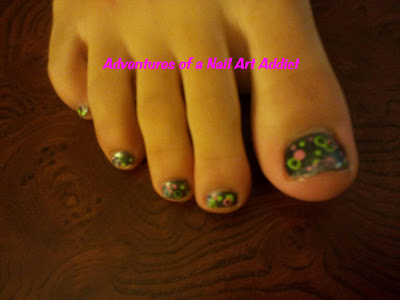 I do not have a picture of her mani because she had to leave but it was super cute.
Base coat Sally Hansen Hot Magenta with an overlay of Milani Jewel FX Fuscia (I found this at CVS and fell in LOVE! It is a glitter polish with different size glitter. I only got the Fuscia but on my next trip I will most definitely be getting the rest)
On 4 fingers there was a diagonal french done with China Glaze Liquid Leather and on the pinky nail an accent nail with a little mustache.

Girl 8
I just realized that the picture of this mani did not turn out  either.  The flash was on and it made the whole picture washed out.  I can't believe I didn't catch it. Then again it was 2:00 in the morning so in my defense I was kinda tired.  :( This was an underwater mani, Bubbles with an accent nail of a little fish and sea weed.
I was really happy with this one as well.
Base Coat China Glaze Frostbite
Bubble outline - Orly White Tips
Fish - Pure Ice Hot Tamale
Sea weed - Spoiled by Wet N Wild Permission to Proceed

So that was my Friday night.  I really did have a great time.  Hoping to do more soon.

Well that is it for now.  I am working on some posts for later in the week.  I found a great tip that I want to share so keep checking back for future posts.  My goal is for 1 post a day but with 4 kids and 2 jobs sometimes life gets in the way.

Thanks for reading!!
Amy <3

Posted by Adventures of a Nail Art Addict at 8:59 AM

Adventures of a Nail Art Addict
HI! I'm Amy. I am a 30 something mother of 4 who has just re-found my obsession for nail art. I want to learn as much as I can and share as much as I learn. Thanks for reading. :) All views and opinions are my own. I am not paid to endorse any products and any endorsement is of my own opinion.